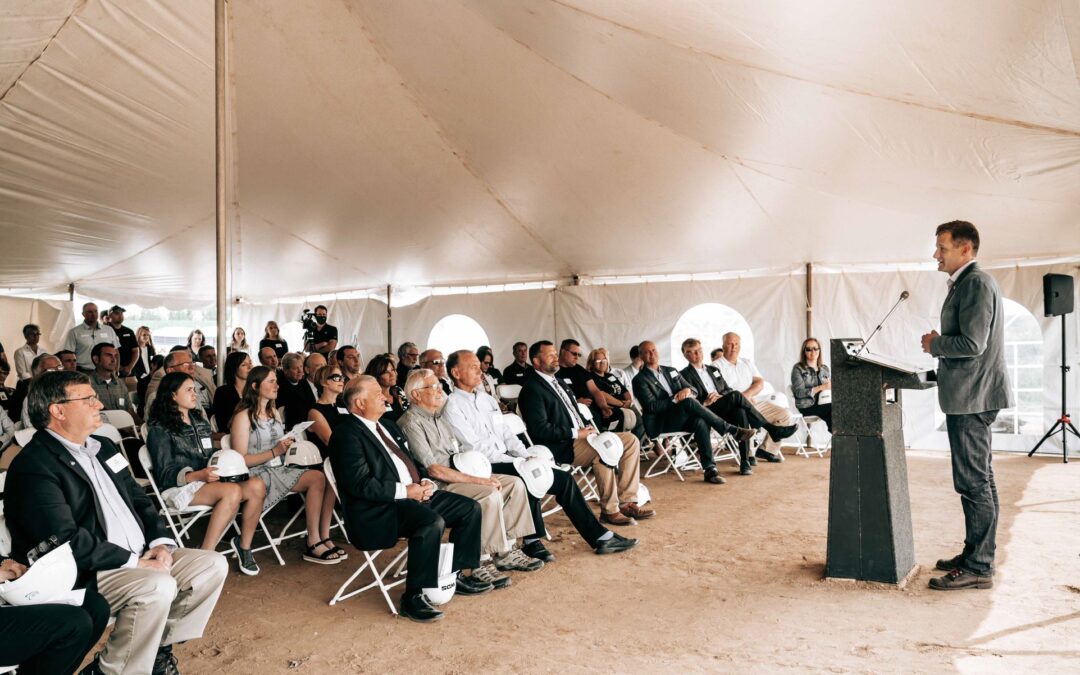 On Tuesday morning, officials from the City of Austin joined officials from Nu-Tek BioSciences,  JCW Development and WDS Construction and the Minnesota Department of Employment and Economic Development to break ground on Nu-Tek’s new 60,000 foot facility that will be built at the Creekside Business Park.

With a target completion date of July 2022, Nu-Tek is looking to become part of a rich history in Austin.

“We really looked at Austin because they have a very rich manufacturing history,” said CEO Tom Yezzi prior to the event. “It’s really the proximity to the healthcare industry with Mayo Clinic Health System and The Hormel Institute.”

Tuesday’s groundbreaking has been over two years in the making as Nu-Tek came in and took advantage of Development Corporation of Austin’s Venture Network that looks to lure businesses to Austin. The City of Austin was chosen after a competitive and extensive site selection process.

Accompanying Yezzi in the groundbreaking ceremony were Austin Mayor Steve King, DCA President and CEO John Garry and Minnesota Department of Employment and Economic Development Commissioner Steve Grove, among others.

“The overall project and Nu-Tek’s decision to choose Austin is supported by the City, Mower County, Development Corporation of Austin, the Port Authority, Austin Utilities and the State of Minnesota,” King said. “All of these entities worked cooperatively to see this project become a reality for Austin.”

King praised Yezzi and Nu-Tek Chief Financial Officer Kent McCoy, saying working with them has been “an absolute joy.”

“The vision and energy these gentlemen bring is incredible,” he said.

“The DCA has been focused on the enormous potential for economic growth in food, agriculture and bioscience,” Garry said. “Nu-Tek’s animal-free growth media is a really good complement to our local and regional economy. The biologics industry is growing and tends to make long-term supply chain commitments. That means this facility should be operating here for years to come.”

Nu-Tek manufactures materials that are used in the next generation of pharmaceuticals for the biotech and wellness foods industry. What really sets the Minnetonka-based business apart, however, is that this is the first facility in the nation that won’t use animal testing, but rather will use plant-based materials.

“Generally in the past, a lot of materials used to grow cell and tissue culture bacterias were materials from animal tissue,” Yezzi said. “Everything (we create) is derived from plant tissue or from yeast extract. This is the first dedicated animal-free facility in the United States.”

The facility is expected to create between 35-40 jobs in Austin. Nu-Tek hopes to cultivate a growing business in Austin, which will start with this new facility and continue as it evolves and contributes to the growth of Austin.

“Our intention, our vision is to start with raw materials we manufacture and work our way up,” Yezzi said. “There are big benefits to controlling the raw material supply.”

For more than 10 years, Nu-Tek BioSciences has been manufacturing and supplying peptones to the pharmaceutical industry and is uniquely qualified to provide large capacities of raw materials. The company’s technology platform was developed to meet the growing demand for animal-free media components in the biopharma industry.

The Austin City Council unanimously cleared the way for Nu-Tek by approving a development agreement in January.

“We appreciate the opportunity to team up with Nu-Tek in building this state-of-the-art facility,” said WDS Construction President Ben Westra.

“As mayor, I’m very proud of all the companies that call Austin home,” King said. “Adding Nu-Tek BioSciences to that list will grow our food and agriculture presence and expand our economic footprint to include bioscience technology. This will be transformational for our community with regard to future business development and job creation.”

— Michael Stoll and Eric Johnson contributed to this story